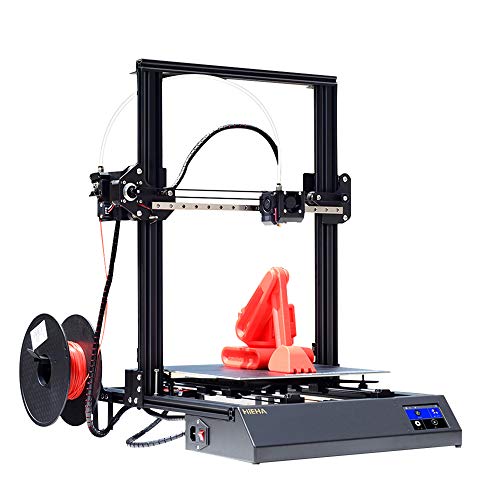 Reliable Brand: If the material is exhausted or unexpectedly disconnected during printing, the sensor will alarm user replacing material to continue printing. HIEHA provides you enjoyable and colorful 3D life.

Kindly Notes:
The printer can only be used with the power adapters supplied by this company, or the product may be damaged, with a risk of fire.
To avoid burning or model deformation, do not touch the model, nozzle, or the platform while the printer is working or immediately after it has finished printing.
When ABS is burnt it releases toxic fumes. Never set the nozzle temperature high enough to burn the material. A well-ventilated room is recommended.
Protective glasses should always be worn when removing support material, especially PLA.

Warranty: HIEHA 1-year limited warranty and 24-hour customer service guarantees you repair or replace at no charge for parts from the date you purchased the product from an authorized HIEHA seller. Please note that extruders are warranted for ninety (90) days.

3D printed plastics tend to remain pretty stable over time. For example, your 3D-printed Yoda won’t turn into a Chewbacca head without some severe plastic trauma… until now. Scientists at MIT have created a 3D printing technique that allows you to change the polymers in an object after printing. This means you can grow or shrink and object, change its color, and even change its shape completely.

“The idea is that you could print a material and subsequently take that material and, using light, morph the material into something else, or grow the material further,” said Jeremiah Johnson, Associate Professor of Chemistry at MIT. Postdoc Mao Chen and graduate student Yuwei Gu led the research and wrote a paper on the findings.

The technique is called living polymerization and it creates “materials whose growth can be halted and then restarted later on,” according to the release.

The team first used a technique that involved a 3D printed object inside a solution. When you shined a UV light on the object while it was inside a solution the resulting chemical reaction released free radicals. These free radicals then bound to other monomers inside the solution, adding them to the original object. This was too reactive, however, and damaged the object.

The new technique uses “polymers with chemical groups that act like a folded up accordion.” When light hits the new materials they stretch out and change the material.

This let them create objects that changed stiffness in UV light and could grow and shrink when heated or cooled. They could even fuse two objects with just UV light.

Sadly you won’t be able to use this technology to morph a Millennium Falcon into the Death Star – yet. However, the technology should make for some interesting materials experiments at MIT.

If you haven’t heard of Glowforge and its incredibly novel entry into the 3D fabrication space, you’re in a group that’s growing smaller every day. After a record shattering Kickstarter campaign that netted the company more than $27,900,000 in purchases in less than thirty days – the already well-funded startup ($9M A from Foundry Group and True Ventures) has plenty of visibility.

The Glowforge uses subtractive rather than additive manufacturing, carving out objects instead of building up them layer by layer like a conventional 3D printer. Technically a 3D laser cutter and engraver, it re-imagines the process of three-dimensional fabrication by combining the attributes of CNC milling machines and the precision of camera guided, computer controlled lasers in a wirelessly enabled desktop unit.

From intricately carved pencil boxes to chocolate rockets, there are no shortage of examples showcasing the myriad materials and projects the Glowforge can tackle, but we wanted to know more. We asked founder and CEO Dan Shapiro for an update on the company and to learn what the current “kings of Kickstarter” have planned in the near term.

Gizmag: I’m sure you’re expecting this first question – when will production units ship?

Shapiro: When we’re sure it’s not the first pancake. We’ve burned plenty of pancakes and our goal is to be sure that when we ship we deliver a device that people will be able to use and enjoy for years. Right now we’re expecting to deliver to our Kickstarter backers during the first half of 2016. For orders placed now, most likely Q3, 2016.

Gizmag: Compared to other 3D printers, the Glowforge machines appear incredibly polished. Who is your intended audience? The pro machine for shared spaces and serious makers and the basic unit for everyone else?

Shapiro: I hope so. When I was seven my dad who was a professor of computer science and my mom who was a professor of speech and communications got into an argument over whether I could have a computer. My mom won so for my seventh birthday I got a Commodore 64. I still remember it clear as day. Sitting on my dad’s knee writing a simple game out of if-then statements. It’s how I got here. And I hope this can be the same kind of tool for the next generation of kids.

Today, a Glowforge is still $2400 for the basic model which is a price point not everyone can get to. It’s going to go up before it goes down too, but five years hence I want everyone to have access to this and I hope more and more families will see this as a learning experience they want to give their kids.

Sure. I can see banks of machines for rent by the hour at maker spaces, but I imagine someone who is a wallet specialist who says “I will print any wallet for you, I’ve got 50 different designs and leathers, I’ll do the lacing so you tell me what you want and I’ll make it exactly to your specifications and take it to the post office.”

Gizmag: So, what’s next for Glowforge?

Shapiro: There’s this wall in my future that’s called shipping and we’re going to get there as fast as we can. The only thing that’s more important to me than shipping is that we have a fantastic product to ship.

I feel pretty good about this product. So many times you have to make a hundred compromises to get it out, but we didn’t have to make a hundred compromises. This is a platform that I think will survive for many years to come and it will be improved constantly by virtue of software. The design principle is we are going to put out a really robust platform that we can build on from a software standpoint and unlock new features. We have so many amazing things that we have planned for this device that we haven’t told anyone about. In fact, it wouldn’t shock me if we were still selling this device or something very close to it four or five years from now. We have some ideas for the hardware but eh … the really exciting stuff is what we’re going to be doing with the software on this thing because it has a ton of potential.

Gizmag: So do you envision a sort of “app store” for designs and templates that you’ll host?

Shapiro: That’s exactly what we’re thinking about. It’s a premium catalog where designers can go and take really beautiful stuff and share it with the world and get paid for it. We want something that’s well curated that brings the most beautiful and useful to the front. I can’t wait to get this out there and let people start experimenting and telling us what to do with it.

Check out the video below to learn more about Glowforge and visit the photo gallery for some examples of the awesome creations this machine can produce (including a 3D-laser-printed-drone with rubber band gatling guns!).

Pre-orders for Glowforge currently start at US$2,395 for the basic model.