Functional Design for 3D Printing 3rd Edition is your guide to the intersection of design, 3d printing, and utility. This volume will demonstrate design practices that expand the possibilities for durable, functional objects. Your functional models will print quickly and reliably, delivering the full potential of the “desktop factory”. Functional Design for 3D Printing will help you to: Turn your ideas into practical designs that print reliably and assemble into durable, functional objects Maximize strength for utility and estimate working and failure load ratings Minimize printing time, material use, and weight Minimize the chance of print failure, ensuring reliable prints on a variety of machines and software Design printable hinges, latches, interlocking parts, and other functional elements Design printable electronic breadboards, prototypes, and simple components Integrate flexibility and multiple materials into your functional designs Solve bed adhesion and warping problems at the design level, improving print reliability Select the correct structural paradigm(s) for each application Know how and when to include dedicated support structures into your model for maximum printability If you are an experienced designer, Functional Design for 3D Printing will present design principles and practices that will help you to quickly model functional, printable objects. This volume will help you to improve and accelerate your design and prototyping work-flow. If you are a novice designer, Functional Design for 3D Printing will be a useful introduction, supplement, and reference for functional design. This volume will give you the technical framework for you to improve your expertise with a minimum of trial and error frustration, and will be your go-to guide for design solutions. 118 illustrations, 234 pages. This third edition is extensively improved and expanded from the second edition: More than twice as many illustrations and 35% more text Extensively rewritten for easier reading and comprehension Updated with modern materials and technologies Some words of praise from purchasers of the second edition: “Unlike many other currently available books about 3D printing which are heavy with ra-ra encouragements about how great 3D printing is and how everyone can excel with a little effort, this book is simply page after page of useful information about the nitty-gritty aspects of actually trying to print good models. This is the kind of knowledge that beginning (and experienced) enthusiasts need to know to avoid any potential frustrations. Don’t be put off by the rather short length of this book; there’s more here than most other books that are hundreds of pages longer. Highly recommended.” “Lots of solid information on best design practice and material properties. It’s written in such a way that the information won’t be out of date for a long time. If you’re experienced at 3D printing this book will reaffirm the things you learned through trial and error, and probably teach you a few tricks you never thought of. If you’re new to 3d printing, or new at designing parts that will be 3D printed, this book will save you a ton of time and materials.” “This book provides a wealth of rules, guidelines, and insights to help you create designs that print and behave properly. It does a wonderful job of explaining all the strange effects that can make even simple prints fail, and how to easily minimize or compensate for them.” ….. “ As others here have suggested, buy the print version so you can highlight it and keep it next to your printer.” 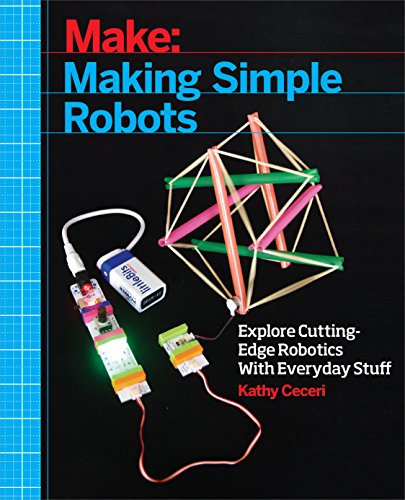 Making Simple Robots is based on one idea: Anybody can build a robot! That includes kids, school teachers, parents, and non-engineers. If you can knit, sew, or fold a flat piece of paper into a box, you can build a no-tech robotic part. If you can use a hot glue gun, you can learn to solder basic electronics into a low-tech robot that reacts to its environment. And if you can figure out how to use the apps on your smart phone, you can learn enough programming to communicate with a simple robot.

Written in language that non-engineers can understand, Making Simple Robots helps beginners move beyond basic craft skills and materials to the latest products and tools being used by artists and inventors. Find out how to animate folded paper origami, design a versatile robot wheel-leg for 3D printing, or program a rag doll to blink its cyborg eye. Each project includes step-by-step directions as well as clear diagrams and photographs. And every chapter offers suggestions for modifying and expanding the projects, so that you can return to the projects again and again as your skill set grows.

While quite a few people in the 3D printing community can easily find their way around 3D modeling software and even make (or modify) cool 3D printable designs, using a 3D printer to directly print parts onto existing objects – 3D printed or not – is an entirely different matter. Want to improve an existing object? Just 3D print a completely new one; that’s the usual approach. However, a team of four researchers from the Carnegie Mellon University are set to improve our design possibilities tremendously with Encore, tool for easily augmenting existing parts with 3D printing.

This WebGL-based tool was developed a researchers Xiang ‘Anthony’ Chen, Stelian Coros, Jennifer Mankoff and Scott E. Hudson, with the help of a grant from the National Science Foundation. And as they explain in a brief paper in the Bibliometrics journal, it was developed with the express purpose of combating those limitations we have all encountered. ‘One powerful aspect of 3D printing is its ability to extend, repair, or more generally modify everyday objects. However, nearly all existing work implicitly assumes that whole objects are to be printed from scratch,’ they write. ‘Designing objects as extensions or enhancements of existing ones is a laborious process in most of today‘s 3D authoring tools.’ They have therefore developed a framework for augmenting existing parts with 3D printing to offer all of us a wide range of new creative options.

As augmentation is quite an ambiguous term, the team further narrow down their tool to three basic attachment techniques: print-over, print-to-affix and print-through. ‘We implemented these techniques in Encore, a design tool that supports a range of analysis with visualization for users to explore design options and tradeoffs among these metrics,’ they explain.

But as you might have guessed, this entire tool relies on understanding the model you’re augmenting. To do so, the user will have to first scan the target object, which probably rule out most of the users already. But if you happen to have a 3D scanner, Encore is capable of attaching the desired (separately designed) augmentation to the object through geometrically analyzing both parts. It will also determine its printability. Encore subsequently moves to the interactive exploration phase, where the tool is visualized and, if need be, altered to fit. Finally, a 3D printable model is generated consisting of the attachment itself as well as any supporting structures for the existing and new part. ‘ Encore also generates 3D models for production, addressing issues such as support jigs and contact geometry between the attached part and the original object,’ the team explains.

As explained above, this tool can be used for three distinguishable printing techniques, of which Print-Over is probably the most important most interesting. ‘Print-Over prints an attachment directly onto an existing object. Encore analyzes the feasibility of printing a new part at different surface locations of the object,’ they explain. ‘Once an attachment point is selected, the object is oriented and scaffolded with support structures. To illustrate it, they added a fridge magnet to an existing teddy bear toy, and we here at 3ders.org are already envisioning countless other applications of this very useful technique.

However, the other two applications are also very useful. Print-to-Affix can be used to add connectors between the existing object and an attachment. ‘This allows the attachment to be fabricated separately, and made to be affixable using fasteners or adhesives. Encore analyzes how the object’s surface properties afford a given affixing mechanism (e.g., how the convexity of a cross section affects using straps),’ they explain. Print-Through, finally, enables users to 3D print through and around existing objects, though this will require you to halt printing and place an object inside the semi-finished print. ‘Encore performs physics simulation to compute when to pause the print so that the attachment can be inserted without interfering the remainders of the print job,’ the researchers add.

While this tool is still under development, the initial options thus seem very promising indeed. In fact, these three techniques will open up a wide range of new 3D printing options while potentially saving a lot of materials by optimizing support structures and removing the need for reprints. We will keep you updated as soon as we learn more.