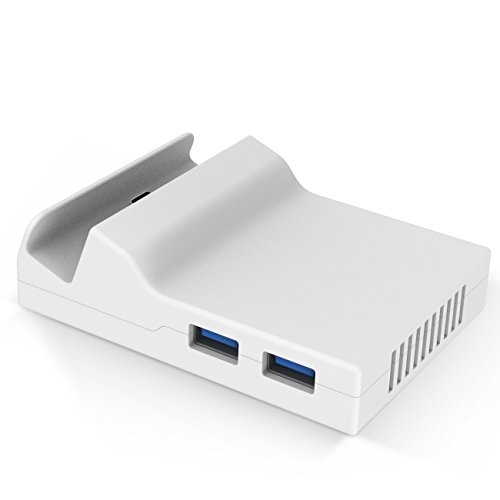 Specially designed case to replace your original Nintendo switch dock.
Compared with the original switch dock, this replacement case is smaller, more lightweight that you can just put it into your pocket and carry it anywhere you want. You just need to scan the QR code labeled on the package and follow the video guidance to install it, and you will get the mini version switch dock which keeps all the functions of the original one. With the given screwdrivers and screws, you can finish the installation quickly

Students from the University of Huddersfield have 3D printed a child-size prosthetic hand – and are hoping to work with a charity to provide them for free.

The university’s 3D printing society built the hand for less than £10 using their table top 3D printer – but don’t have anyone to give them to.

The students are now looking for a charity for children with disabilities who can give them out for free.

Menchanical engineering student Younes Chahid, who set up the society, said the design for the hand was made available free over the internet by an organisation called Enable, for anyone to print.

The Raptor hand, 3D printed by students at the University of Huddersfield (Photo: hud3dps)

He said: “Children get really excited by prosthetic hands and they feel like superheroes when they go to school.

“It takes two hours to put together the first time but you can get it down to 30 minutes.

Check out some of the society’s 3D printed creations

Younes, an international student from Morocco, said 3D printing was invented in the late 1980s but its patent of fused deposition modelling – there are many other types of 3d printing – finished in 2009.

Since then the technology has improved so that desktop printers can be bought for £175, he said.

3D printing is usually done with plastic, but ceramics and even chocolate can also be used.

Designs can be downloaded from the internet, but the society is aiming for students to make their own designs and have them printed.

And the society even takes commissions from outside the university from businesses and individuals.

Members are studying everything from engineering to animation, and have printed a toy elephant with moveable parts, keyrings to sell in the student union shop, a human brain for a mental health project, a micro SD card holder, a scale model of the Eiffel Tower – and even a model of Emley Moor Mast!

He said: “There was a need for the students to see it and see the possibilities of 3D printing.

“When you first design something and you see it 3D printed you get addicted to it!”

Scientists in Brazil have used 3D printing to create lifelike busts of centuries-old Roman Catholic saints. After obtaining CT scans of the saints’ preserved skulls and conducting extensive research and analysis, the scientists were able to 3D print the generated models in a plastic-based plaster.

From Lazarus to Jesus Christ, popular biblical figures have a history of coming back from the dead. But while those two household names were brought back by the power of God, two 17th century Peruvian saints are about to experience resurrection of a different kind—through algorithmically informed 3D printing.

This month, scientists in Brazil will present 3D printed busts of St. Rosa of Lima, the patron saint of Peru who died in 1617, and Sister Ana of Los Angeles Monteagudo, a Dominican nun from Peru who died in 1686 and was beatified in 1985. The two saints will become the newest additions to a series of 3D printed holy figures created using CT scans and photogrammetry captures of the saints’ preserved skulls.

To create 3D models of the saints’ skulls, scientists used photogrammetry, a technique which involves taking hundreds of photographs of the skull from different angles. Tomography, an X-ray scanning technique, was also used to get an idea of the internal structure of the skull. To then turn these scanned skulls into lifelike representations, the 3D models of the skulls were “fleshed out” with muscles, tissue, and skin tone determined by an algorithm, which takes into account dental and anthropological analysis and historical research.

“Our aim is to create an individual face from the skull that we believe to be the most compatible with the person when they were alive,” said Paulo Miamoto, a forensic dentist and anthropologist based in Santo. “Everything is designed to take into account the period during which the person lived and to give life to their features as accurately as possible.”

When the algorithm-based software has finished generating the facial features of the saint in question, the scientists are left with a digital 3D model of how the saint might have looked when they were alive hundreds of years ago. Then, to show their “resurrected” saints to a wider audience, the scientists use 3D printing to create physical busts of these generated figures. The printing took place at the Renato Archer Center of Information Technology in Sao Paulo, with a plastic-based fine plaster used as a 3D printing material.

“The printing process in rebuilding a face can be slow, taking as long as a day or more to complete, because the impression has several layers,” explained Cicero Moraes, a computer graphics designer based in Sinop. “When the final printed object reaches our hands it is like a sculpture, completely white and blank. From there we have to add the anatomical details, the facial characteristics, the flesh color and tones, and build an appearance that does justice to the holy person.”

The 3D scanning and printing technology being used in Brazil is helping to give the religious community a glimpse into its own rich history. Before these advanced procedures were made possible, Catholics had no real idea what saints of the past might have looked like. Despite the exciting nature of these revelations, however, Miamoto and Moraes are not themselves religious: “We are motivated by the scientific aspects of these studies and interested in the human beings, which is what all saints were, before being canonized,” said Miamoto. Moraes added that his lack of faith has never been a problem when dealing with religious people in the convents and churches he has visited.

The 3D printed busts of St. Rosa and Sister Ana are the latest in a series of saintly 3D prints, joining those of St. Mary Magdalene, a witness of the resurrection of Jesus, and St. Anthony of Padua, a Portuguese Franciscan friar who died in 1231. The scientists found that St. Anthony, though painted and sculpted countless times in the centuries since his death, probably looked quite different to how he is generally depicted. These new discoveries show that, in both religious and historical contexts, 3D technologies can be used to correct misconceptions and bring the past back to life in an accurate, informed manner.

“In the case of St. Anthony, we found his features were more robust than what had been shown for over 800 years,” Moraes said. “We discovered his nose was neither thin nor small and that his lips were large. In the case of St. Rosa, the remaking of her face revealed a pretty woman with soft features and big eyes, different from how the classical paintings show her.”