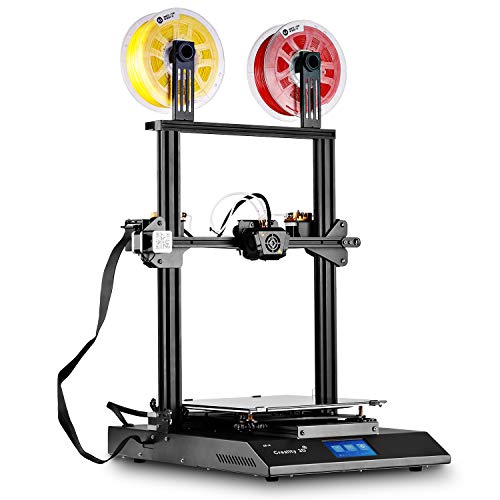 If you are an experienced 3D printing enthusiast looking for an upgrade, look no further. CR-X’s dual extrusion system gives you more printing capabilities than you will ever need. It also has a tempered glass heated bed with a nano-technology (Carboloy) print surface, which makes both adhesion and part removal easier for the user. This printer will meet all your 3D printing needs and beat all your expectations in every way.

As an industry leader since 2010, SainSmart offers a 1-year manufacturer’s warranty on 3D printers, so you can rest assured that your purchase is protected. Contact us for professional solutions or recommendations and expect a qualified response within one business day. Buy with confidence!

Mode of Operation: Connected to a PC or Offline with SD card< The power of GE is so far-reaching and encompasses so many different divisions and entities that indeed it’s nearly impossible to keep track of all their often wondrous activities worldwide and within so many sectors. A recent announcement reminds us of this, combining both their long-term investments and their new and deepening commitment to additive manufacturing also as they have been selected by the US Department of Energy to lead a $2 million additive manufacturing research project relevant to advanced nuclear technology, with more than $80 million invested overall in this project and studies.

Nuclear power has always had its controversy, and while you may support its use, having one down the street may not be quite so appealing, correct? But the plants have to go somewhere. I experienced this in my early 20s, having just rented a wonderful house out in the country in NC. It was on an enormous piece of land with an idyllic pond, a pair of geese, and a dozen mallard ducks who lived on the property. Euphoria ensued as I reveled in the beauty of all the space, fresh air, and charming, honking waterfowl, but that was quickly deflated about a week later when a knock-knock on the front door revealed a smiling woman in a sensible business suit, holding a manila folder of information and an emergency radio.  She was from the nuclear power plant just a few miles away that no, I did not know about.

And so, an emergency radio suddenly became a part of my life, blaring sirens about every weather issue for miles, often in the middle of the night, and letting me know about every test at the plant. It was a bit unnerving, but everyone assured me the power plant was a good thing and safe as could be—and best of all, the fish in the lake right there offered up some fine eating! That began my education in what nuclear power plants are all about, as well as how people feel about them. A controversial conversation for sure, it will be interesting to see how 3D printing is received and integrated within the industry.

You may be surprised to realize that GE and Hitachi have been building power plants for fifty years. And while many around the world may have remained skeptical about the power, the industry, and what happens in the case of an apocalyptic meltdown a la Three Mile Island or Chernobyl, companies like GE Hitachi have full confidence in what they are doing, on a mission to create clean energy. Proven technology and extensive R&D is their foundation for success. The alliance between GE and Hitachi is meant to serve the nuclear industry as they execute a vision together for ‘a broader portfolio of solutions.’

And now, there’s a new player within their commitment to the nuclear power industry as GE begins putting their GE Power Advanced Manufacturing Works facility in Greenville, South Carolina to work creating 3D printed metal samples. Ultimately, these are meant to make their way into power plants for a new system in creating replacement parts. And while many worry about every part and detail that makes up a plant, surely the benefits of 3D printing—and not to mention the use of metal—are coming heavily into play here.

“The potential of 3D printing to speed delivery time and reduce the cost of manufacturing performance-enhancing replacement parts for nuclear power plants is quite significant,” said Jay Wileman, President and CEO, GEH. “We want to recognize the Department of Energy for its leadership in advanced nuclear research and we look forward to working with the Idaho National Laboratory.”

This is a long process though, apparently. GE has released information stating that samples will be 3D printing in metal in South Carolina and then shipped to the Idaho National Laboratory (INL) where they are to be irradiated in a testing reactor and then taken out and tested and compared to an analysis of unirradiated material conducted by GEH. This is part of research meant to assist in the process as GEH begins deploying 3D printed components for fuels, services, and new plant applications. GEH will be given the finest tools to work with during this R&D phase, with the Nuclear Science User Facilities offering the funding so that they have access to superior neutron and gamma irradiation and post-irradiation examination services.

“Nuclear power is our nation’s largest source of low-carbon electricity and is a vital component in our efforts to both provide affordable and reliable electricity and to combat climate change,” said Energy Secretary Ernest Moniz.

The Greenville additive manufacturing facility is just one in a continual list of openings we’ve been following by GE, as they make their commitment to 3D printing very well known—and, worldwide. With an initial $73 million poured into this particular facility so far, and much more to come, numerous other technologies are also focused on there to include robotics, automation, advanced software, and more. We’ve also reported on their openings of other additive manufacturing facilities in areas such as Pennsylvania and India.