When Delhi-based product designer Surbhi Panphal, 25, gave her brother a rakhi last August, he was surprised to see a photo of the two of them on it. The rakhi had been 3D printed, for free, as part of a promotional campaign.

* Finance consultant Kaustav N, 32, from Mumbai, wanted to get his wife a unique cellphone case for her new iPhone. So he had one custom-made and 3D-printed, with an image of a lion on the back. It cost him Rs 2,200.

* MBA student Rahul Nath, 24, from Calcutta had always dreamed of having six-pack abs. So, as a surprise, in March, his best friends paid Rs 2,500 for a 3-inch 3D-printed model – called a 3D selfie – showing his face on a sculpted body!

Across the country, 3D offerings are getting personal. Once limited to medical, architectural, automotive and industrial applications, the past year has seen more entrepreneurs offering retail 3D-printed products, and more customers buying them.

Driving the market is the fact that 3D-printed products can be customised or even designed from scratch by the buyer. “In the age of social networking, people want to flaunt more than ever, and anything of their own design is like some kind of signature,” says Guruprasad Rao, 49, a former professor of design at the National Institute of Fashion Technology, Delhi, who is now director of technology and operations at Imaginarium, a 3D-printing company in Mumbai. The biggest advantage of the 3D-printing process is that it allows the consumer to democratise design. “You need not be a goldsmith or a designer. Anyone with an idea can approach these companies and bring it to life,” says Prudhvi Reddy, 30, an MBA and co-founder of think3D.

3D products are becoming especially popular as gifts, because of the novelty factor. “It’s is a different level of gifting,” says Delhi-based student Aanchal Jain, 21, who gave her friend a 3D selfie for his birthday in January. “These products are quick, convenient, and an easy solution for those who are out of ideas and need to find something for someone who has everything.”

Solidry alone says they have sold 400 3D selfies in plastic since October, and 125 in sandstone since they launched that option in February. “The USP is that the model looks exactly like the person, down to the last crease on their T-shirt,” says co-founder Pranav Prakash, 29.

A recent report by market research company 6wResearch has projected that the 3D printing market in India is set to touch $79 million by 2021, driven by demandfor decoration and display products, and specialised design. “We have close to 500 3D printers in India registered with us, up from about 200 in May 2014. India accounts for 3% of our total traffic, increasing 10% month on month,” says Bram de Zwart, co-founder and CEO of 3D Hubs, an online platform that connects 3D printer owners with people looking to have things printed.

The market began to open up four years ago, with an increase in homegrown 3D printers due to the expiration of key technology patents. “This has resulted in a fall in printer prices,” says Divan of Cremagine.

This company, launched in March, is typical of India’s 3D start-ups. Divan has an MBA in marketing, his co-founders are brothers Bakul and Bhavik Soni, both of whom have worked in their family jewellery business. “We want to make products that satisfy our target age group of 20 to 35, who are the early adopters of any new technology,” Divan says.  With the technology now more affordable, the next hurdle will be awareness.

“3D printing is all about the experience. People need to see it happen to really believe that it’s possible,” says Vaibhav Chhabra, 25, founder of Maker’s Asylum, a community makerspace in Mumbai.

So some companies are offering free samples – like Panphal’s rakhi, which was made for her by Solidry. Others, like Imaginarium and Cremagine, invite people to their offices to see the technology at work. Think3D conducts monthly workshops. And df3d conducts workshops, participates in education shows and has crafted a short introductory course for school children. “3D printing is the future,” says Sumanth Behara, 24, founder of Whooop. “In the next five years, I see 3D printers becoming as common as photocopying machines.” 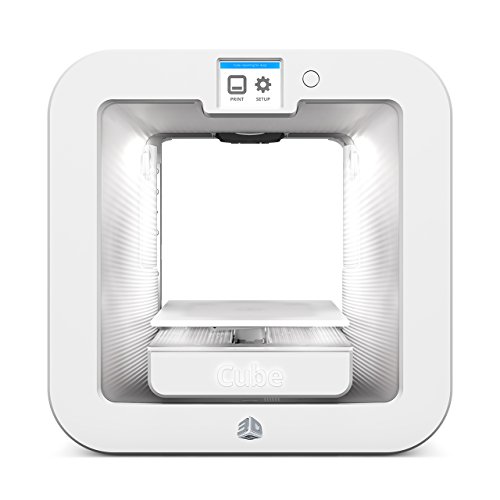 With a build size of up to 6 x 6 x 6 inches (152 x 152 x 152 mm), the Cube offers easy-to-use software on both Windows and Mac platforms that quickly processes your 3D model for its best build result and sends it wirelessly to your Cube printer for immediate printing.

This incredibly easy-to-use 3D printer is certified safe for home use, meets IEC Home Printer Certification 60953 (TUV) and is recommended for children (and adults) aged 8+. Wireless connectivity, insta-load materials cartridges, preloaded filament jets and auto-leveling of the print pad makes for an effortless and satisfying 3D printing experience every time.

More information please visit: http://www.mbot3d.com/products/personal-3d-printer-colorful-version
Please note this 3d printer is not made by MakerBot, but it is compatible with MakerBot.

1. A fully assembled and tested machine with Heated Bed Platform and MK7 Extruder
2. One Filament 1kg package free
***Assembled Machine***Availability: Ships with a 5-10 days lead time for this color version.***

print LCD control board is not inclued now.
Please note that this new extruder is intended for 1.75mm filament only!

Our best-selling pre-assembled 3D printer – perfect for the office, classroom or home environment.

Clear and open design.
Clean, tidy nozzle and purging area – easily removable.
Can be placed and operated anywhere (with power). Machine
Easy to use and maintain, no need for maintenance contracts.

Designed and engineered to be accurate and robust yet simple.