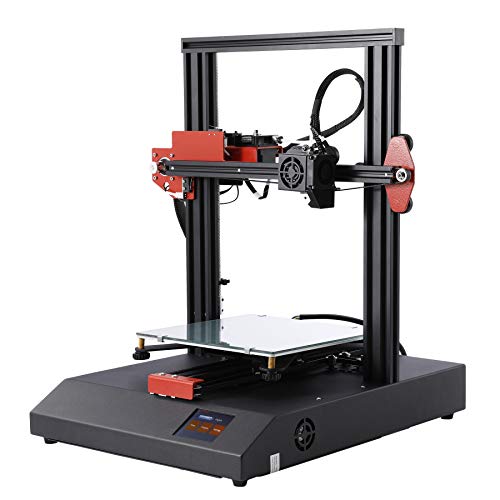 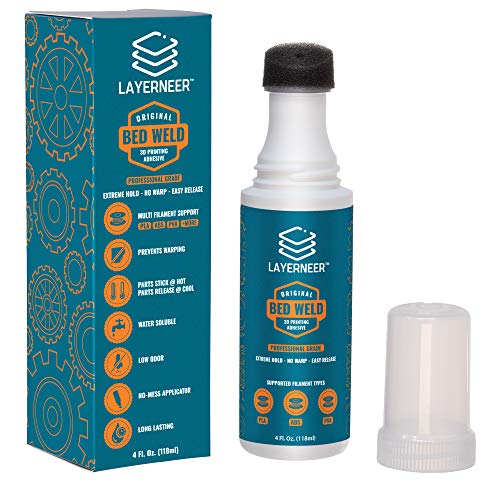 Do you have trouble with parts warping or coming detached from the printer bed?

Have you struggled with part removal after printing is finished?

BED WELD was engineered to solve these challenges by enhancing your print surface so that it grabs hold of that critical first layer when your build surface is hot, and refuses to let go with its gecko like grip. In many cases you can often print without rafts or build plate adhesion layers, saving you time and material.

Once your part is finished the coating dynamically morphs as your printer bed cools, releasing its hold so you don’t have to wrestle to get your part off.

No more chipped glass or broken parts. In most cases, your part will fully detach without the need for tools. In the event the part does remain attached it normally takes just a simple lifting of a corner using the edge of a razor as a lever, and the part easily pops off.

BED WELD comes with a unique built-in applicator that makes applying the coating a simple no mess process. The coating dries quickly to form a thin film that is not sticky, so there is no risk of getting a clogged nozzle or having residue on your finished part.

BED WELD is backed by an unconditional 90-Day money back manufacturers guarantee, so you risk nothing!

The optimal treatment for humeral shaft fracture remains controversial. Although a large proportion of these fractures can be treated without surgery, a recent study, involving a randomized controlled trial, compared bridge plate with functional brace fixation for humeral shaft fractures and concluded that surgical plating has a statistically significant advantage with a better DASH score, lower non-union rate, and lower residual deformity rate [1]. As for proximal third humeral shaft fractures, they were thought to be complicated with a higher non-union rate when treated conservatively compared with middle and distal fractures [2, 5, 16]. Since the helical plating technique was introduced for the treatment of humeral fractures, some studies have shown that this technique resulted in increased stiffness compared to fixation with a straight plate under torsional loading and produced satisfactory clinical outcomes [14, 17]. However, how to produce a suitable helical plate for each individual patient is a big question for surgeons. Previous studies have proven that the 3D printing technique is a good tool for designing surgical plans and pre-contouring plates used to treat other bone fractures [18â€“20]. Our results demonstrate the benefit of pre-contouring plates on a 3D-printed model for this special technique.

In this study, all kinds of fractures (from type A to type C) were treated by helical plating technique, and satisfactory outcomes were obtained. It was coincident with our previous cadaveric study results [11], so we thought this special technique was a good choice for these fractures. Previously, Stedtfeld and Biber reported that approximately 49.3% of the proximal third humeral shaft fractures extend into the humeral head and that this type of fracture cannot be characterized by conventional AO classification [6]. In our study, a total of 41.3% (19/46) of fractures involved the proximal humerus, a rate slightly lower compared with their report, but still a high rate of these fractures. Consequently, attention should be paid on the proximal third humeral shaft fractures since about half of them need adequate proximal fixation.

At the 1-year follow-up visit, all fractures were healed and none of the patients had suffered non-union, an outcome better than that reported for other treatment methods [1, 2, 5, 9, 21â€“23]. The mean union times of the Synbone group and the 3D-printed groups were 16.16 and 15.57Â weeks, respectively, which was similar to other studies even though our patients were older than in other studies [11, 17, 24]. Functional evaluations were satisfactory but were worse than those reported by others who conducted the same surgeries (Constant-Murley score 76.80, 76.95 vs. 88.6) [13, 17]. This may be attributed to the fact that our population was much older, so that humeral fracture might be combined with rotator cuff degeneration in our enrolled patients.

The primary outcomes of this study were that surgical duration and blood loss were reduced by the use of a 3D-printed model for pre-contouring the plates before surgery. This result was consistent with our hypothesis and can be explained by the fact that the humeri of older patients in our country are much shorter than the standard Synbone, requiring surgeons to adjust the plates during surgery. Since the 3D-printed model represented the actual size of the bone, the plates pre-contoured on these models were always suitable for fixing the fractures. Because of MIPO technique application, there was only 15Â ml of blood loss difference between the two groups; maybe it was not clinically relevant, but on the whole, it reduced 12.5% of blood loss volume and presented a small part of the benefit of 3D-printed technique.

There are some limitations to this study: (I) the retrospective design limits the level of evidence and only represents one single center; (II) some patients who died within 1Â year of surgery are excluded from this study, which may influence the final results; (III) all these surgeries were finished by surgeons in one trauma center, so personal differences cannot be avoided; and (IV) this study only included Asian population, and maybe the results could be challenged by other races because of different skeletal sizes.